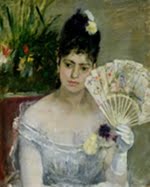 Though the exhibition will soon end, you still have a chance (until February 12th) to see this interesting exhibition in the Thyssen-Bornemisza museum. Berthe Morisot was the first female painter to join the ranks of the Impressionists, taking part in the legendary First Impressionist Exhibition of 1874 and in other subsequent ones of the group. More than thirty works from the Musée Marmottan Monet will be shown alongside others from the Thyssen collections.